It may be challenging to determine which beetles are the biggest since there are more than 350,000 recognized species of beetles on the earth, and more are always found.

Because of their tenacity and the fact that they nearly never go extinct, beetles are one of the most varied groups of insects. This is mainly because beetles virtually never become extinct.

Surprisingly, the Polyphagia order of beetles, the most significant known subgroup of beetles, has not experienced the extinction of even a single family of species during their evolutionary history!

Let’s look at the top 10 biggest species of beetles in the world, each of which has a diverse set of traits and a specific habitat.

It only seems fitting that the Atlas beetle would be included on this list, given that it was named after Atlas, one of the Greek titans.

Atlas beetles are another massive species that belong to the Scarabaeidae family. Males of this species have three long horns that bend in different directions.

As you can think, these horns are utilized to compete with other males for food, territory, and mating privileges. They are also used to defend their area.

Atlas beetles have a high degree of sexual dimorphism; the males are much bigger than the females. Female Atlas beetles are typically only around 2 inches long, in contrast to their male counterparts, who may grow to lengths of up to 4.7 inches.

They may be found across a significant portion of Southeast Asia.

These formidable insects are nasty right from the moment they are hatched, and their enormous larvae are highly vicious and competitive with one another. When food is short, they will often battle with one another to death.

One of the largest and heaviest of the world’s beetles is the Actaeon beetle, which belongs to the family of beetles known as the rhinoceros.

Although its larvae usually are significantly more giant, weighing over 240 grams (almost 8.5 ounces!), adults of the species are still a force to be reckoned with, often weighing in at approximately 150 grams (5.5 ounces).

Actaeon beetles are also at the top of the list regarding the length of their bodies, which may range anywhere from 2 to 5 inches.

Males are much longer than females, with their long horn-like protrusions accounting for up to one-fourth of the difference in length between the sexes.

The females do not have these horns but have little mandibles that look like pincers. The name Actaeon beetle derives from Actaeon himself, a hero from Greek mythology who was taught by the centaur Chiron, who is also famed for training Achilles! Actaeon was able to defeat his enemies thanks to Chiron’s guidance.

Check out also: Top 10 fastest American cars ever made

8.  Beetle of the Caucasus (Chalcosoma Chiron)

The curving distinguishes the giant scarab beetles, three-pronged horns that protrude from their cephalothorax in the shape of a W.

These horns give the beetles their common name. The males often use these horns to compete with one another for mates and food.

There are four different subspecies of Caucasus beetles, the majority of which are distributed in the countries of Malaysia and Indonesia.

Male Caucasus beetles may grow to lengths of 3.5 to 5 inches or more, making them one of the biggest beetle species in all of Asia.

They are the most significant members of the Calciosome genus and are also one of the largest species of beetle in the whole world. Females are typically between 2 and 2.5 inches long, making them somewhat more diminutive than males.

Within the Goliaths genus, there are six distinct species of Goliath beetles and a significant number of other, less well-known subspecies.

Like many of the others on this list, these beetles are very sexually dimorphic. This means that males and females of the same species have numerous distinct morphological variations, the most notable of which is their size.

Female Goliath beetles typically grow to a length of between 2 and 3 inches, while their male counterparts may grow to a height of up to 4 inches.

As larvae, they may weigh up to 3.5 ounces, equivalent to 100 grams; however, by the time they reach their adult weight, they have often lost quite an amount of weight.

Even though they don’t have teeth, the mandibles of Goliath beetles are very sharp and may readily pierce the skin and draw blood.

They are also extraordinarily powerful insects, with the ability to lift things that are up to 850 times heavier than themselves.

These beetles have two sets of wings in addition to their six legs, all of which have incredibly keen claws. The Goliath beetle’s ability to climb trees is made possible by its feet.

Elytra are the name given to the outermost set of wings, which serve the purpose of protecting the inner, more fragile set of wings. Flying is accomplished only with the use of the inner wings. 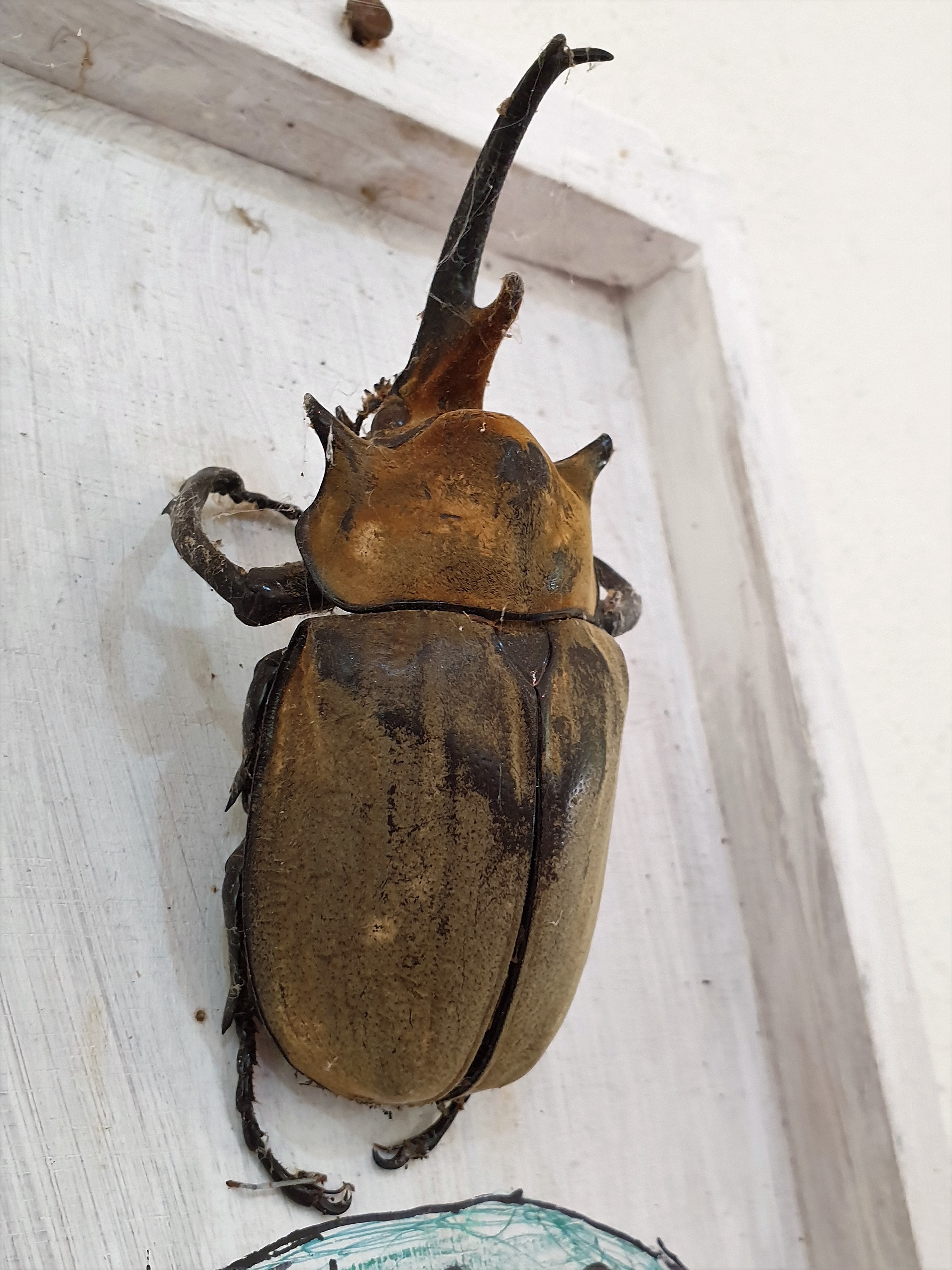 The Dynastidae subfamily comprises a group of rhinoceros beetles; the elephant beetle is one of the insects that belong to this subfamily.

Although it is estimated that there are over 1,500 different kinds of rhinoceros beetles, the elephant beetle is one of the biggest of them all.

They may reach a length of anything from 2.25 to 4.75 inches throughout the course of their lives, with the males being noticeably bigger than the females.

Because the male elephant beetles have long, strong horns that resemble trunks, they are known by this name. Elephant beetles battle with other males while fighting for food or mates.

Females, on the other hand, do not have horns but smaller mandibles, which they utilize to gnaw on fruits and the bark of trees.

Even though elephant beetles are often solid brown or black in appearance, their bodies are coated in wonderful yellow hairs, which provide them with a golden hue.

The beetles’ elytra, also known as their forewings, are particularly densely covered with these hairs. As with the vast majority of other sexually dimorphic beetle species, men have far more giant mandibles than females. The size of a typical European stag beetle might vary significantly according to the country in which it is found.

Beetles native to some nations, such as Germany and Spain, are often more significant in size than beetles native to other countries, such as the United Kingdom or Belgium. It is not unusual for male stag beetles to grow to a length of at least one centimeter and sometimes much more!

It is interesting to note that despite the fearsome appearance of the males’ mandibles, they are much too weak to pinch or bite consistently.

When they battle with males, particularly when they are vying for a mate, they often use their mandibles in a manner similar to antlers.

On the other hand, females can deliver a significantly more severe bite because of the increased accuracy with which they employ their relatively few mandibles. 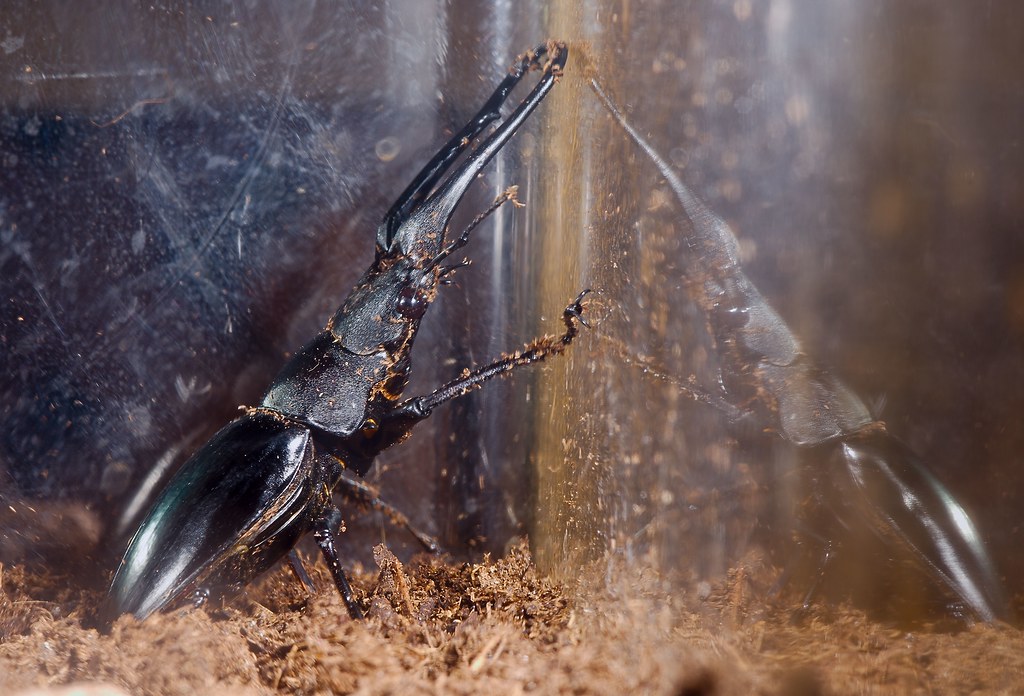 Commonly reaching up to 12 centimeters, or 4.7 inches, in length, the giraffe stag beetle is the biggest member of the family of stag beetles found anywhere in the world.

The Prosopocoilus Giraffa genus has eight distinct subspecies, the majority of which may be found in the moist forests of Asia, namely in countries such as the Philippines, Thailand, Vietnam, and even India.

These dangerous beetles have mandibles that stand out from others because of the notches and serrations that resemble teeth.

These mandibles account for about half of the whole length of the insect’s body! Males of this species, like males of many other species on this list, have much bigger mandibles, which they use like antlers to pick each other up and fling each other while battling for food and mates. Males of this species also have a much higher reproductive rate. 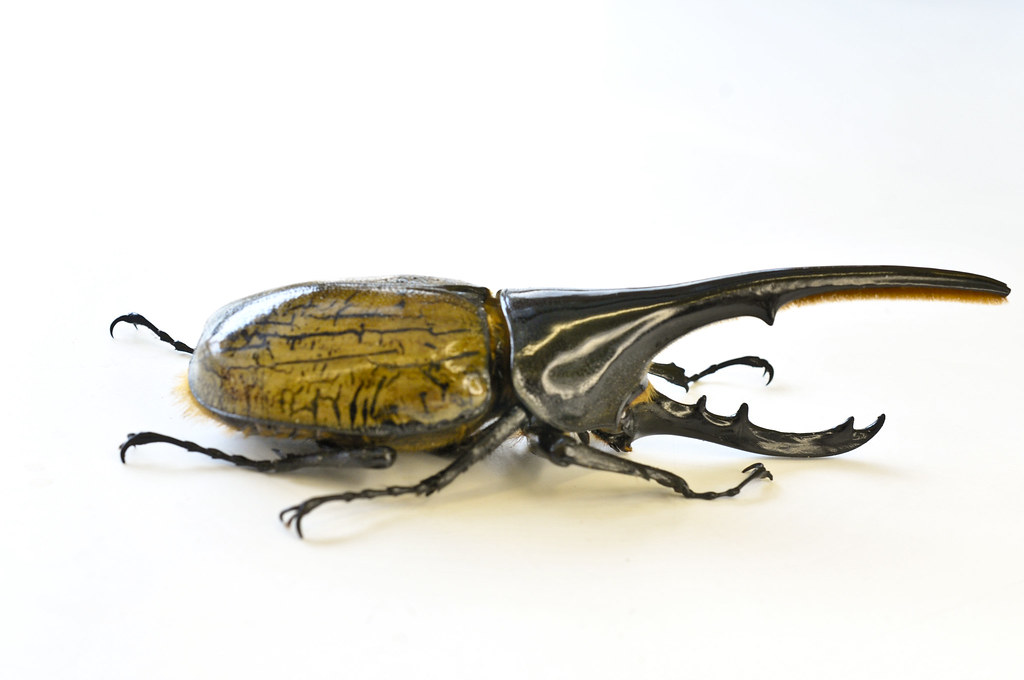 Another bug that lives up to its name is the Hercules beetle. The beetle species has the record for its most incredible lifespan and is one of the biggest flying insects in the world.

It is very uncommon for Hercules beetles to reach a length of up to 7 inches, and this measurement considers the distinctive horn size on their thorax.

Without this horn, they would only be approximately 3 inches long at most. It takes up a significant portion of the length of their body.

Because only the males of this species have this horn, the females of the species are much smaller and seem less threatening.

Hercules beetles are not nearly as dangerous as they seem; their primary diet consists of decaying and new wood and a wide variety of fruits.

Most of the time, rather than hunting prey, they use their horns as a method of self-defense or to battle with other males of the species. 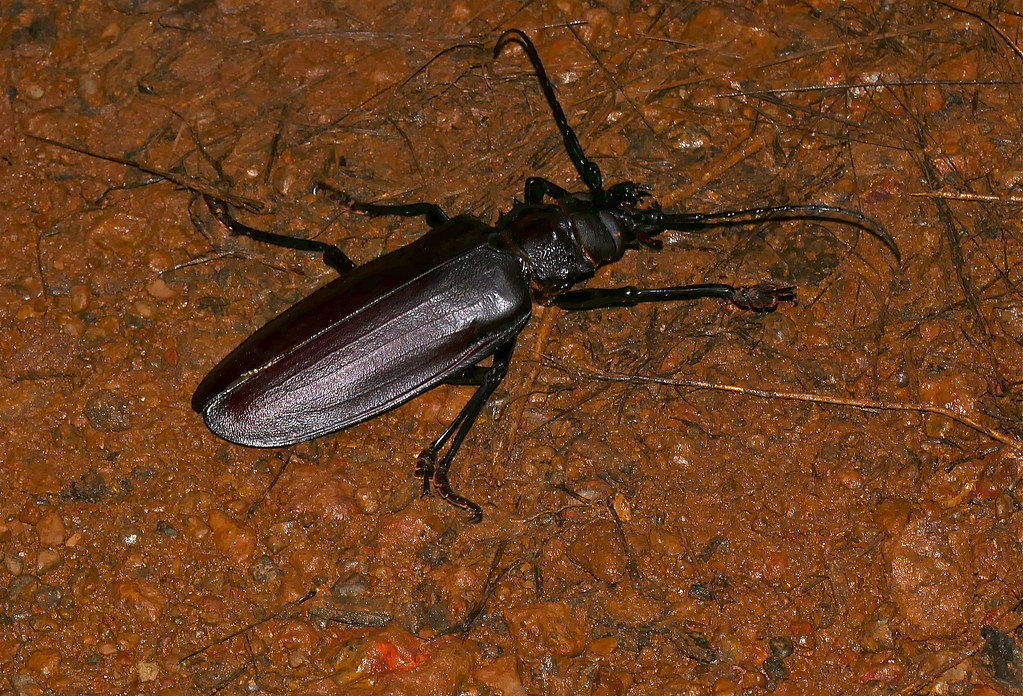 The body length of the titan beetle places it in the top spot as the biggest beetle in the world. It towers above other insects in its native environment, since it may reach a staggering length of 6.5 inches long on average.

It is the only species that belongs to the Titanus genus and may be found mostly in the jungles of Colombia, Peru, Bolivia, Brazil, and Ecuador.

Titan beetles are not to be trifled with because of the massive, razor-sharp mandibles that they possess. These mandibles can easily slice through human flesh and even break trees in half.

Other effective defensive systems that this magnificent insect owns include their sharp spines and the capacity to hiss to warn off potential predators by forcing air through many tiny pores on the sides of their body known as spiracles.

It’s interesting to note that titan beetles have sresembleches, but in reality, they are more closely related to long-horn beetles. 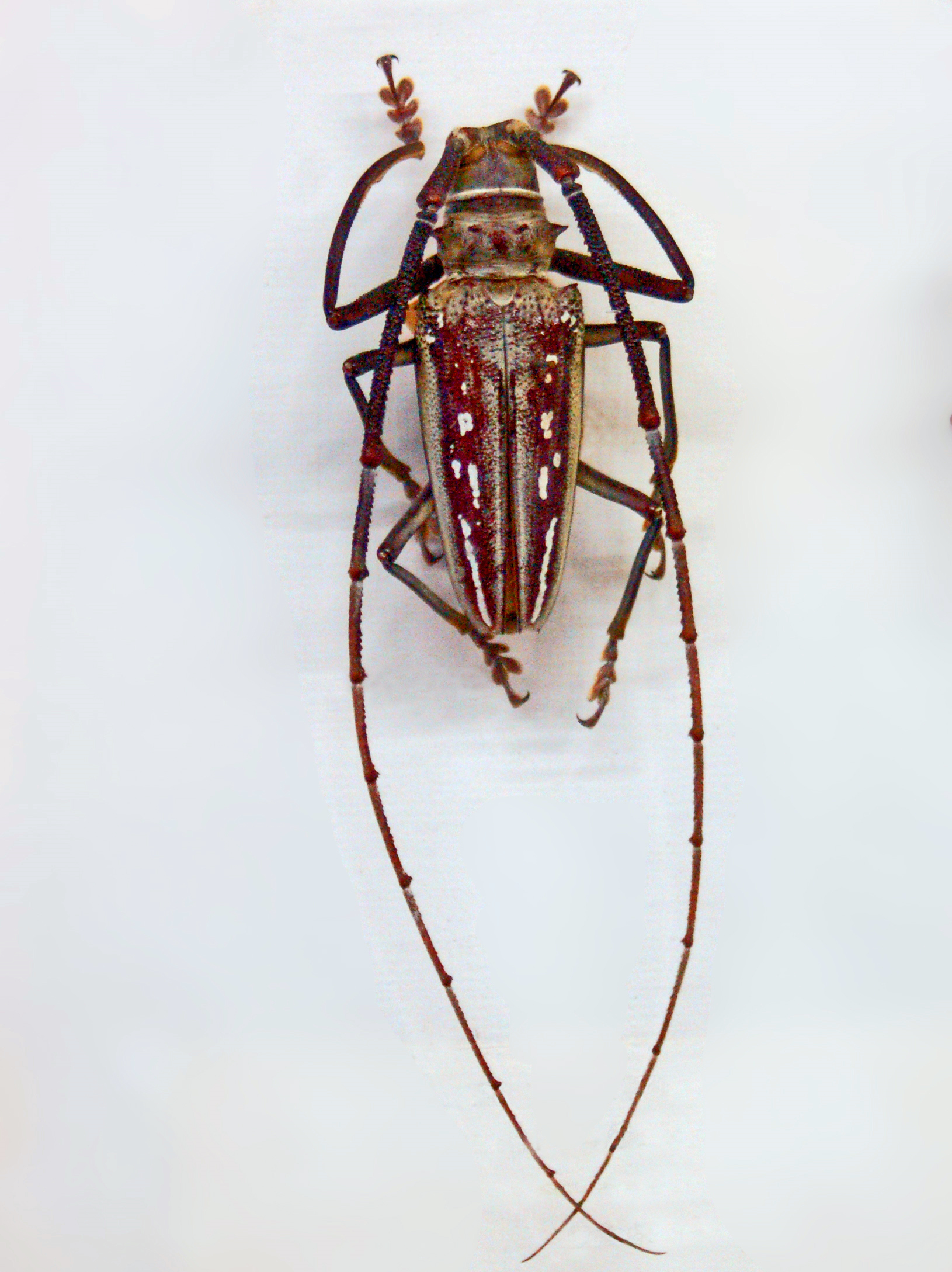 Even if its body isn’t very huge or thick, Wallace’s long-horn beetle is nonetheless the species of beetle that holds the record for being the longest in the world!

These remarkable beetles may grow to be as large as an incredible 26.5 millimeters (10.5 inches) in length, and they are indigenous to the regions of New Guinea, Indonesia, and portions of Australia.

Their enormous antennae, which are generally more than twice as long as the length of the insect’s body, are responsible for most of their overall size.

In 1858, the species received its current name, which honors Alfred Russel Wallace. Wallace, a British explorer, and scientist discovered the beetle in the Aru Islands in Indonesia.